Where do you fall in line?

Lines...., is it just me or do you find yourself in numerous lines throughout your life,  pushing you onwards to the carrots of shopping, Medicare reimbursements, Santa photos with the kiddies (love that one),  luggage collection, lavatories (ladies sigh :)), city peak hour and the 2011 necessity of the quest for liquid gold, especially before 9am?

Allow me to push you a little more in line;  where is your place in the temporary waiting world... are you a pusher-inner, a where you land or 'no, you go first' type of line rider?  Ladies and Gentlemen step right up, move forward and stake your claim,  take your place in line.

I was in McDonald's on the weekend, and proudly in line.  On this day I noticed it was incredibly territorial,  I began my journey at the front, waiting to be served. Being front of line  is a rare occurrence for me as Ive now hit my stride in being comfortably happy to choose the long line, after many years of deliberating which length of line is best.  After waiting one minute I was alerted to the fact that I was not in a line at all, by my fellow waiters who formed behind me.  Tell that to my stomach I thought, yup- I was hungry, as were my kids- although I figured out that it would only be a 5 minute wait and the food wasn't going to go any where.

So onwards was my journey to overtake and join another line.  Others that had followed suit in my phantom line behind me began bagging out Golden Arches by the bucket-load, stating 'surely it was a line', 'now I have to wait'. Poor us, we were hard pressed.  Now really, looking back its quite funny as I watched new line territories being marked (or as good as) and  heaven forbid anyone that would cross the invisible line of personal space that separated consumers of their impending quarter and cheese! Momentum gathered and I almost imagined a race gun firing as we each inched toward the counter millimeter by millimeter to stake our Macca's.

This got me thinking..where do I fall in the line? Until the last couple of months *blush* I  have to confess I used to be a line pusher-inner. My push in days go back years, I remember being at a music festival in Victoria and the car line up to enter was 3 hours long. So with a little bit of encouragement from my friends on the inside, I talked my husband into driving up the opposite side of the road..., (head looking down now), past kilometers of cars and  turned into the entrance right on time! Yes...I am quite embarrassed now, and promised my husband we would never push in like that again.

Was this push-in worth it?  No- not really, my poor husband  was so embarrassed (as was I) when we later heard the multitudes of carnival players saying 'did you see that  car??...I cant believe they did that!' So it is safe to say I have never encouraged such line stealing since. Other than that,  I now practice 'legal' push ins; to get up close at a concert or when boarding planes late, all the while asking permission and being very grateful  to my fellow line neighbors.

In my later days of my mid thirties, I now hang back a bit in line ...it is more reflective as opposed to my 20 something bustle. Being a specialist in line queuing I now ponder, who is really leading in these lines anyway? I have confirmed on the whole it comes down to two types.  1. The type that busts through on the shortest line  for the prize of  a grease filled burger or 2. Those that smile and just go about their line, ambiguous to territory or length.

Actually there is a third type, and I love them. Some line goers are so generous that they even let others in front of them and by choice- yes!  Its true, they are out there. We all know the type, when you only have two items to purchase and the person in front of you has twelve. Now...that is line sacrifice, and for me it goes a long way- such a long way that its caught on,  I'm even caught offering my spot in line on the odd occasions :)

So right here is the conundrum, who is leading who and how are we leading in line? If it were up to me I'd suggest the hang backers could be the true leaders- poise, calm, patience, grace. And probably the people Id be happy to follow.

My MISSION: feel the heartbeat of this nation, lift the bar for all Australians, lead people into a victorious life 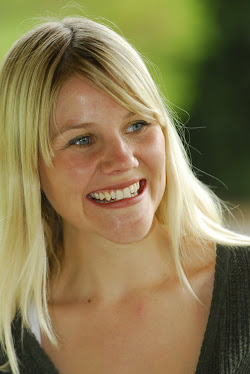